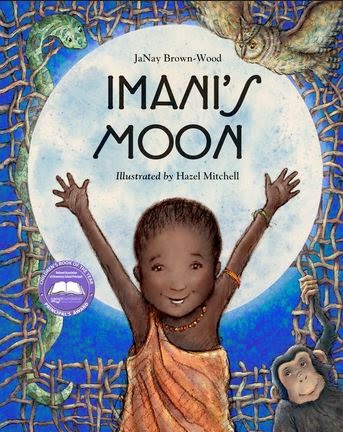 "A challenge is only impossible until someone accomplishes it...it is only you who must believe."

Young Imani wants to be something great. She wants to do something memorable. Yet day to day, she is faced with the teasing and taunting of the village children who pick on her because she is small. Inspired by stories her Mama tells of Olapa, the moon goddess, and Anansi, the clever spider, Imani makes several attempts at reaching the moon, however she is unsuccessful. At last Imani is energized by the adumu, a cultural celebration of the Maasai, and she strengthens herself with a mindset that she can jump to the moon. Once she has accomplished this mission, Imani owns her mother’s advice that she can do anything if she believes it possible.

With remarkable, vibrant illustrations to match the tale of Imani’s repeated attempts and eventual success at feeling accomplished, JaNay Brown-Wood and Hazel Mitchell have teamed up to create a new, diverse picture book about empowerment and the importance of believing in yourself and your ambition. Imani’s story can be shared with readers again and again, similar to the tales of Olapa and Anansi shared with Imani as instances of perseverance and commitment.

In addition to hosting this book as part of the Imani's Moon Blog Tour, I had the opportunity to pose questions of JaNay and Hazel about the significance of storytelling and what they did to tell Imani’s story so beautifully in Imani’s Moon.

MG: The role of storytelling is highlighted twofold in Imani's Moon, both as Mama shares stories with Imani, and also in JaNay's styling of her story as a tale to be told. Did you (or do you) have storytellers in your life? Who, and what memories of their storytelling can you share?


JBW: I really love this question. I did have storytellers in my life and I was surrounded by very creative people. For one, Dr. Seuss was a MAJOR storyteller in my life, and his work would always come to life through the voice of my father as he read me Seussical stories, as well as many others (Shel Silverstein and A.A. Milne were two other favorites of ours). I can still remember the inflection and cadence of my father's voice as he read. These early stories often prompted my own stories to pop into my head and play out on the page as I wrote them down, or acted them out with dolls and bears. Also, I have a cousin who is a fantastic saxophonist, and I always felt like she told stories with her horn when she played. I grew up listening to her play at jazz events and concerts all around Fresno, and I'd sometimes make up lyrics to her wordless melodies in my head. So although these two examples may not be traditional instances of storytelling, they are certainly experiences that resonate with me.


HM: My mother used to read to me when I was a child, and I remember her silly voices, especially in Beatrix Potter stories. She also used to draw little cartoons of bunnies and Victorian ladies that I loved. I don't really remember anyone else as a significant storyteller. I know that my best friend and I made up excellent stories from the age of 6 into our teenage years. Probably we believed a lot of them were true!

MG: What stories were significant to you as a child? In your adult life? What stories have shaped who you are?

JBW: Many of my memories of stories and books being read to me as a child include Dr. Seuss, Shel Silverstein, A.A. Milne as well as the Mercer Meyer stories. As I got older, I got hooked on the Harry Potter series. I was intrigued by how JK Rowling so seemingly effortlessly created this complete world that captivated readers, and made a massive impact on our culture in general. Her creativity stays with me, and I strive to capture some imaginary and impactful elements in the stories I write, too.

HM: As a horse mad child I loved any horse or pony story and I devoured them. As a British child, I adored Enid Blyton, as did most children of that time. As I grew older I loved Alan Garner, a British fantasy author and then C.S. Lewis and Tolkein. I also loved classics like Jane Austen, the Brontes, Dickens and read every Agatha Christie, Sherlock Holmes and Dick Francis going! My reading became more wide ranging as I reached young adulthood. Douglas Adams influenced me as a teenager for sure and I read a lot of science fiction! In older years I like biography and non-fiction. But mostly I read picture books and middle grade now!

MG: I imagine that representing the Maasai story in the telling of Imani's Moon must have required research. What did the process of engaging in (or with) the Maasai culture look like for each of you?

JBW: I did a fair amount of internet research as I looked up and read about elements of the Maasai cutlure. I also looked at different books in libraries to help paint a mental picture of the regal Maasai. Additionally, I watched some videos, such as them participating in the adumu, and other elements of their lives, and allowed those details to morph into pieces that colored Imani's world. Additionally, in high school, I took a mythology class and I remember learning about different African stories like the Boshongo creation myth. Later I was introduced to Ananasi, and then much later Olapa. I think those stories from high school stuck with me. As a matter of fact, I wrote a whole manuscript out inspired by the Boshongo creation myth when I was in college, but I'm not sure if it is one I'll try to publish.

HM: I did a lot of research for Imani. Of course I knew of the Maasai and their culture. But I needed to absorb the dress, jewelry, the traditions, the structure of the people-which is very particular. I also spent time researching Africa and the trees and creatures that Imani encounters. Most of this was done online...search engines and photo sites like Pinterest, Flickr, etc. I did find some great books about the Maasai and read a lot about their tribal life. I watched videos of the Maasai on YouTube, especially of the jumping dance. I even got to wear a Maasai blanket and hold a spear as my friend's son spent time in a Maasai tribe. To help me with Imani, I had the help of a young model for poses and gestures. That helped a lot!

MG: We know that the beauty of picture books is the thoughtfulness of the illustrators in conveying the story through their illustrations, and Imani's Moon is certainly no exception. What were some of the choices you faced when creating the artwork for Imani's Moon? Can you share a particular spread in which you were really selective about your design or creation? 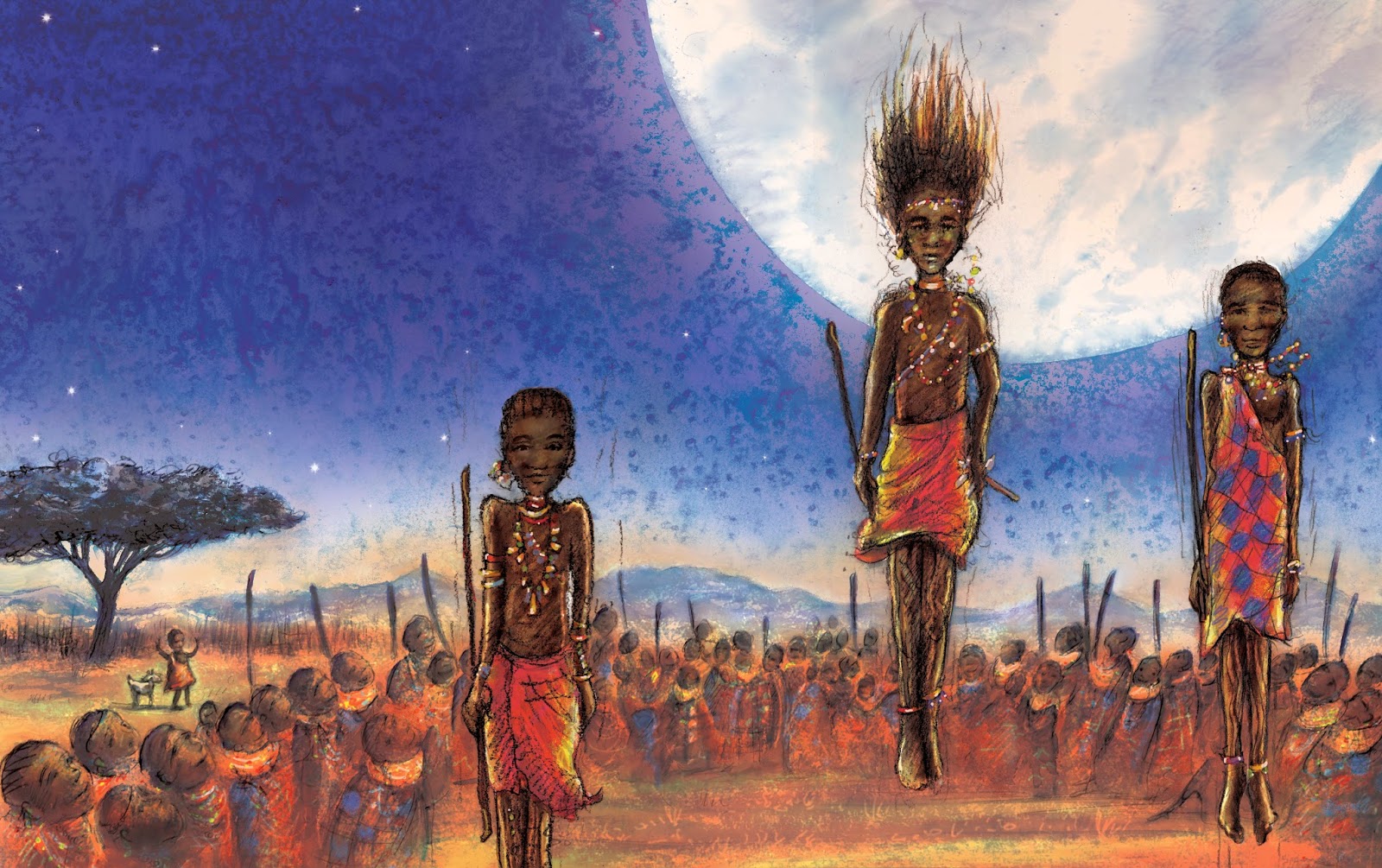 HM: I did spend a lot of time thinking about the composition of the spreads. I have to give credit to my Art Director, Susan Sherman, at Charlesbridge Publishing, who guided me in directions that really helped some of the illustrations be more insightful. When illustrating, there is always a choice of what to show and what to leave out. The illustrations must bring something else to the words, and not just be a direct replica of what has been said. Emotion, setting, angle, close up or distance, mood-this can all affect the story and the way the viewer regards the scene. Continuity is very important. One of the spreads I thought about a lot was the "adumu" ritual. I wanted this to be dramatic...it's Imani's "ah-ha!" moment. I spent a lot of time working out the composition, with Imani in the front and then finally I have her in the background coming upon her tribe. I hope this scene captures the vibrancy of the Maasai people.


MG: Imani is a young girl of the Maasai tribe. Did her culture shape her story or did the story shape her culture? What, if any, connection is there between the theme of storytelling and the Maasai culture?

JBW: I think that there were elements of the Maasai cutlure shaping her story and her story shaping pieces of her imaginary world. I had the idea of a child jumping to the moon before I added in the Maasai, thanks to a thought shared by my older sister, Erin. But as I massaged the Maasai culture into the initial drafts, it seemed to flow seamlessly. Of course, the story is inspired by the Maasai and aspects of the story couldn't/wouldn't actually happen in real life, but I feel that Imani comes through authentically and the hope to accomplish something major in one's life is a sentiment that everyone everywhere can relate to. Also, I understand that the oral tradition of storytelling is historically an important component of many African cultures, and I wanted this to show through Mama as she shared the inspirational tales, and then Imani at the end who then shares her own inspirational story. I liked the idea of the story coming full circle in regards to the oral tradition, concluding with Imani's Tale of the Girl who Touched the Moon story. It felt like the perfect "bow on top" to an inspiring adventure.

MG: It's conceivable that Imani's Moon will become a mentor text in many classrooms where students are writing their own stories of perseverance and believing in oneself. What would you, or Imani, say to writers who are trying their hand at storytelling on paper every day?

JBW: Wow, that would be so wonderful if Imani's Moon became a classroom text. I would be beyond thrilled.

As for words I'd share with children, I'd tell them anything that is worth having takes hard work, so don't let challenges keep you down! When writing, let the words flow and remember that writing is a process that ALWAYS includes editing, revising, and fine-tuning. It's just like sculpting, you start off with a block of clay or stone, but you know the finished masterpiece is in there. You just have to keep at it and work your magic. Patience and perseverance is key. And lastly, I'd tell them believe and you will get there!

Thank you, JaNay and Hazel, for taking the time to respond to these questions and for bringing us Imani's Moon.

YOU can WIN your own copy of Imani’s Moon through a generous giveaway by Charlesbridge Publishing!


To be entered into the random drawing, complete this quick and private form. The winner will be drawn using a random number generator and notified on Friday, November 14!

Congratulations to Emily Wayne, winner of her own copy of Imani’s Moon!