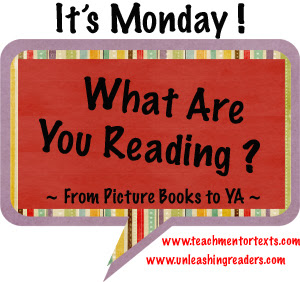 (Fiewel & Friends, September 22, 2015, ARC provided by NetGalley)
Jackson is smart, and he knows that all signs point to financial trouble for his family, which means change, sacrifice, and discomfort. He's growing up, faster than we might feel he should. Frustrated with his parents and their efforts to shield him from hardship, Jackson faces tough decisions about whether to "protect" his younger sister and keep his families trouble a secret from friends. Crenshaw, an oversized jellybean-eating cat and Jackson's old imaginary friend makes a return appearance in Jackson's life, coaxing him to make choices that honor the truth.
Crenshaw awakens readers to the discomfort kids face when working hard is just not enough. And Crenshaw relates to readers that having one true friend who encourages you to be true to you can give you the power to face the tough stuff, too. The same beloved qualities of Katherine Applegate's The One and Only Ivan are present in Crenshaw: it's gentle, it speaks to your heart, and ignites an inner stir about what is unjust about our reality.

Unusual Chickens for the Exceptional Poultry Farmer, by Kelly Jones, illustrated by Katie Kath
(Knopf Books for Young Readers, May 12, 2015)
When Sophie and her family moved to the farm they inherited from her uncle, she also inherited chickens. Of an unusual type. Very soon into her new farming experience, Sophie discovers that the chickens have various magical powers. When Sophie's chickens are at risk of being chicken-napped, she pulls out the stops, eventually enlisting the help of her small-town community  in protecting them.
The format for this novel added to the quality of entertainment. The story is told largely through alternating letters that Sophie writes and sends to her abuela and to Agnes, a mysterious chicken-connoisseur. Sophie is likable and independent, determined to have success with raising her great-uncle's chickens.

Circus Mirandus, by Cassie Beasley
(Dial, June 2, 2015)
Micah's grandfather, his caretaker, is very ill. Their close relationship has always been bound and sealed by Grandfather's stories of Circus Mirandus, a magical destination where Grandfather could celebrate magic. Promised a miracle in his youth, Micah suspects the miracle is integral to preserving more time with Grandfather, and he makes it his mission to insure the miracle is delivered. In doing so, Micah finds all is not quite what he thinks.
The storytelling of Circus Mirandus is engulfing, calling you in as the magic circus tent might, grabbing hold, and charming you with stories--stories of which you'll question the validity. This book is full of lyrical and poignant lines that will linger in your mind, and maybe your heart.

Listening for Lucca, by Suzanne LaFleur
(Wendy Lamb Books, 2013)
Siena's family moves from inner-city New York to coastal Maine in an effort to support her younger brother, Lucca, who is selectively mute. In their old Victorian home, Siena finds a treasure in a lost pen, a pen that tells her stories of a family from the past (World War II era). The more Siena pieces together parts of the past family's puzzle, the nearer she comes to growing into her own person and empowering her brother to find his voice.
With just the right amount of magic to keep the book mysterious and reader curious, Listening for Lucca, keeps readers turning pages, eager to see Siena, and Sarah--from the World War II family--resolve their conflicts. 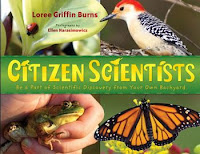 Citizen Scientists, by Loree Griffin Burns, photographs by Ellen Harasimowicz
(Henry Holt and Company, 2012)
In Citizen Scientists, Loree Griffin Burns introduces readers to four citizen scientist projects in which they can take part. Helping to monitor monarch migration or the populations of birds, insects, or frogs tap into students' natural interests and curiosities. Ellen Harasimowicz's photography is precise, bold, and attractive, capturing students' attention and drawing them in. The writing empowers students, charging them as growing citizens to consider the ways they can help the world around them. The text includes plenty of additional resources, websites, and other ideas for citizen scientist projects in the back matter.

What I am Currently Reading:

What I am Reading Next (in no particular order):
The Iron Trial, by Holly Black
Like a River: A Civil War Novel, by Kathy Cannon Wiechman
The Lost Track of Time, by Paige Britt
Posted by Melissa Guerrette at 7:10 PM 4 comments:

What do YOU do when you read a book that you just LOVE?

If you are anything like the crazy book loving kids from my classroom, you just can't wait to tell someone about it.
Someone.
Anyone.
EVERYONE.

For the last two years, my students have been incredibly fortunate to be pen pals with Linda Urban. She has shared with us stories from the process of writing and publishing her forthcoming book Milo Speck: Accidental Agent. The students and I feel especially lucky to have been advanced readers of the newest Linda Urban book.

As we wrap up the school year, and the students reflect on the highlights of fourth grade, they keep circling around to the experiences we had with Milo Speck: Accidental Agent. Sharing the book and creating book buzz about a title we know you will love has strengthened our community.

I'm glad the students have given me permission to share the Milo Speck: Accidental Agent book trailer they created on my blog. They were thoughtful, creative, and committed to representing the book well for potential readers.

We hope you enjoy the book trailer now and love the book in September.

And, if you feel inclined to share, please do. Nothing would make them happier.