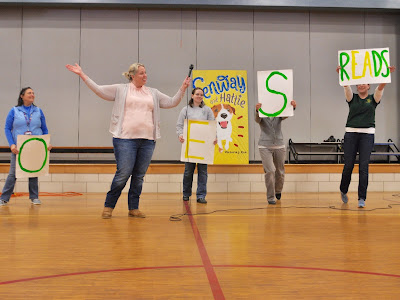 After our 2017 OES Reads season kicked-off with a wild surprise (read this post to catch-up on the kick-off), we certainly didn't expect to wrap up our five weeks with still more surprises.

Our OES Reads season was scheduled to be five weeks long, with reading chunks of Fenway and Hattie, our whole-school-community book split over that time frame. We expected to conclude the OES Reads program with a Closing Assembly on the last day of the fifth week, and we had made plans to Skype with author Victoria Coe the following Monday. It was a pretty well-planned schedule.

Only, when you live in Maine, even the best laid plans are subject to disruptive weather.

You might imagine how frustrating the last two weeks have been, out of the classroom more than we have been in.

Thankfully, after days of stormy weather and dark skies, Friday morning came without a 5:00 a.m. phone call to cancel school, and plans to celebrate the end of OES Reads would be underway. I emailed Victoria to confirm that we *would* be at school and able to Skype today. As I climbed into the car, my phone buzzed in my pocket.

It was Victoria.
She got my email.
She had "big secret news."
Could I sneak her into the building at 10:30?

Victoria Coe, who had already generously scheduled (and rescheduled) two Skypes with our students, had decided to hop in the car and make the three-hour trip to surprise our students in person on this final day of OES Reads.

I do love a good book-ish surprise.

When the K-2 students and teachers reported to the gym for their "Skype," they were surprised to find Victoria Coe there waiting for them. (It was fun to watch the realization spread among the teachers, too!) Kids who had prepared questions for Victoria took their turns asking, and some teachers asked questions, too. And when Victoria read a bit of Fenway and Hattie and the Evil Bunny Gang aloud, even the youngest readers were still and attentive. 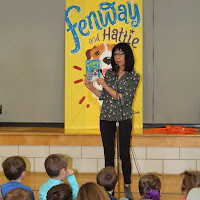 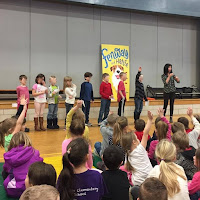 In the afternoon it was the grade 3-6 students who were in for a surprise when Victoria greeted them at the door for their "Skype." Victoria answered more student questions, ranging from wonders about author decisions while writing Fenway and Hattie to curiosities about the writing life of an author. Then, some sixth grade students who had drafted short writing pieces from a dog's point of view bravely stood before their peers and our guest and read their writing, leaving Victoria and the audience to guess where or what they were exploring. There were successful guesses all around. 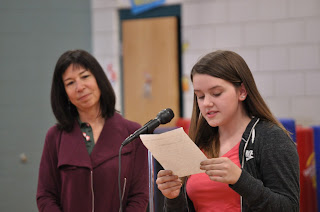 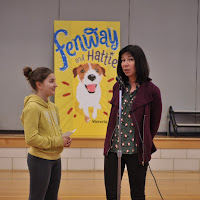 Immediately following the older students' "Skype," the K-2 classes returned to the gym so that the whole school was gathered together once again. It was time for our Closing Assembly. 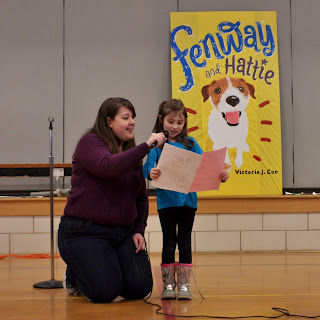 Our Closing Assembly has become a much-loved celebration because it has traditionally been a sharing of student work. The Kick-off Assembly is comprised of staff presentations, skits, performances. By contrast, at the Closing Assembly we feature students who have something to share related to our OES Reads book. Personally, I was happy that Victoria's surprise visit would allow her to see how her work, Fenway and Hattie, had inspired some of our kids.

The Closing Assembly featured a first grader who wrote her own book called Fenway and the Wicked Floor. Poised as could be, she introduced her book and read her story aloud to the audience. Another first grader had made a video of himself reading Fenway and Hattie to his family pet, and fourth grade students who had done perspective writing. There may also have been a silly flashmob by many good-sport staff members, too. We thanked Victoria again, publicly, and sent her home with a small gift of appreciation. Victoria shared with our OES Read-ers that her very favorite part of being an author is getting to spend time with the readers who have read Fenway and Hattie.

Having Victoria join us for our last chapter of OES Reads 2017 was an enormous gift to our students and our school community. Her generosity and interest in our students and whole-school reading community will not be forgotten!
Posted by Melissa Guerrette at 9:15 AM No comments: