I love the idea that readers make friendships with characters they meet in the books they read. Sometimes when I read a book, I meet a character who I think would enrich the lives of all of my students.

I think all of our readers should be friends with Bat. 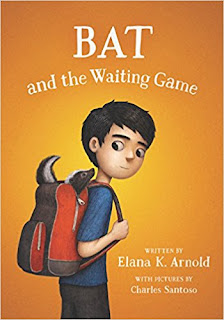 Bat is Bixby Alexander Tam, a charming, animal-loving, younger brother and friend in Elana K. Arnold's chapter book series with Walden Pond Press. In the first book, A Boy Called Bat, readers meet Bat and learn about his family including an older sister (Janie), his veterinarian mother, and his dad, at whose house he spends Every-Other Weekend. Readers experience Bat's love for all animals as he begs to keep and care for a bitty skunk kit, and his determination to arm himself with research and deep knowledge of this new skunk by seeking out expert advice.

In the newest release, Bat and the Waiting Game, Bat is back (and Thor, too!). Janie gets a part in the school play that involves daily after-school rehearsals which necessitates change in Bat's after-school plans, too. These changes mean spending more time with new people and new places and new situations which can be tricky to figure out.

The things I love most about Bat and the Waiting Game can be summed up in three words:

Character. Bat is such a likable character. His adoration of Thor, the skunk kit, is so sweet. What's not to love about his enthusiasm about growing a garden of vegetables for Thor to eat and his desire to involve his classmates in the project, too? Even Bat's blunt and honest take on things (like Janie's obsession with the play) contribute to making him an endearing character. And, as the narrator of his own story, Bat's feelings are transparent to the reader, making him both engaging and relatable.

Perspective. Bat is a character on the autism spectrum, and Arnold beautifully portrays Bat's personality and preferences. Without making autism be the focal point of the book, Bat's point of view provides us this lens through which we read and "see" the world differently: his classroom, the baseball field, someone else's house, a sleepover. Bat's story is fertile ground for building empathy and understanding.

Heart: The relationships between the characters in Arnold's writing emanate love. The care Bat's parents have for him pulses off the page in scenes where his closest adults help him process hard feelings. The portrayal of love between Bat and Janie, even in the most trying of times (What happens when a skunk shows up to a school play?) is big and honest. It is heartwarming to be privy to the development of Bat's friendship with Israel as he works out kinks and misunderstandings. Heaping examples of love and compassion radiate in this book, and can't we all stand to grow more loving and compassionate?

Bat and the Waiting Game publishes from Walden Pond Press on March 27, 2018. Gift your readers a friendship with Bat.


Walden Pond Press has generously offered to giveaway a copy of Bat and the Waiting Game to one lucky blog reader.  Use this form to enter!
(Giveaway will end at midnight EST on March 27, 2018.) 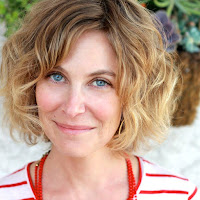 Elana K. Arnold grew up in California, where she, like Bat, was lucky enough to have her own perfect pet — a gorgeous mare named Rainbow — and a family who let her read as many books as she wanted. She is the author of picture books, middle grade novels, and books for teens, including the National Book Award finalist title What Girls Are Made Of. Elana lives in Huntington Beach, California, with her husband, two children, and a menagerie of animals. She calls the “Bat” series for Walden Pond Press “books of her heart.” You can find her online at www.elanakarnold.com.