Sometimes you get an invitation that feels like a privilege.

That's how I feel about being the last stop on the Blog Tour for York: The Shadow Cipher, the upcoming alternate-history middle grade novel by Laura Ruby that publishes May 16.

I'm thrilled to add my voice to those who are already recommending the book widely and share with you the Educator's Guide for Classroom Use I created for York: The Shadow Cipher. 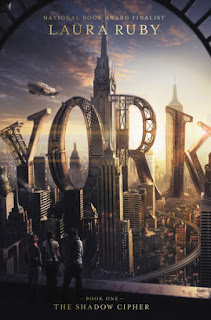 Here's the publisher's synopsis:
It was 1798 when the Morningstarr twins arrived in New York with a vision for a magnificent city: towering skyscrapers, dazzling machines, and winding train lines, all running on technology no one had ever seen before. Fifty-seven years later, the enigmatic architects disappeared, leaving behind for the people of New York the Old York Cipher — a puzzle laid into the shining city they constructed, at the end of which was promised a treasure beyond all imagining. By the present day however, the puzzle has never been solved, and the greatest mystery of the modern world is little more than a tourist attraction.
Tess and Theo Biedermann and their friend Jaime Cruz live in a Morningstarr apartment house — until a real estate developer announces that the city has agreed to sell him the five remaining Morningstarr buildings. Their likely destruction means the end of a dream long-held by the people of New York. And if Tess, Theo, and Jaime want to save their home, they have to prove that the Old York Cipher is real. Which means they have to solve it.

From the first lines, The Shadow Cipher had a hold on me, and I was thoroughly captivated through all 448 pages of the novel. (In fact, I'm ready to keep reading and will eagerly await Books 2 and 3.) I marvel at the way Laura Ruby has taken a city so well-loved and familiar and twisted the past just enough to force readers to suspend what they think they know and consider just what they maybe don't know with certainty. With twin characters, Tess and Theo (who compliment each other in all the right ways) and their neighbor Jaime (who carries an emotional story of his own) readers will be transported and absorbed in their resolve to solve the Old York Cipher.
The layers of York: The Shadow Cipher are deep, and Laura Ruby incorporates many themes and big ideas that can be explored through the lens of Humanities and/or STEM. With moral and ethical questions that are as modern as they are historic and brilliant bits of wisdom woven throughout the adventure, the possibilities for discussion and extension to present-day are plentiful.
For sure, Laura Ruby's York: The Shadow Cipher is a 2017 release not to be missed.

You can win a signed copy of York: The Shadow Cipher
by filling out this form.
Giveaway will be open until midnight (EST) on Friday, May 19. 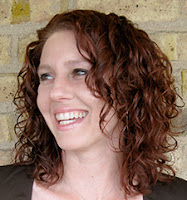 About Laura Ruby:
Laura Ruby is the author of books for adults, teens, and children, including Bone Gap, a National Book Award finalist and Michael L. Printz Award winner, among dozens of other accolades. Her other books include the Edgar-nominated mystery Lily’s Ghosts, the Book Sense Pick Good Girls, and the acclaimed novels Play Me and Bad Apple. She is on the faculty of Hamline University’s MFA in writing for children and young adults program and lives in the Chicago area. You can visit her online at www.lauraruby.com.

Also, don't miss the Educator's Guide to Classroom Use and Activity Guide provided by Walden Pond Press. Be sure to visit the previous stops on the Blog Tour for more thoughts about York: The Shadow Cipher and more chances to win.
Posted by Melissa Guerrette at 7:00 AM